This month started with showjumping and ended with Eva on antibiotics!

It’s been a while a long while since we’ve been showjumping. In fact the last time we entered a showjumping competition was in October!

Part of me really wanted to push it and do the 90cm and meter classes but I had a lesson the week before – which I covered in my last blog post – and in short decided we don’t have the energy for it.

It was a hot day and the warm up in the indoor arena was very very warm. Plus with our energy already being low I wanted to make sure not to knacker her out before the round.

So to warm up I did a lot of stretching walk, a few canters and about 3 jumps in total. We then went outside and Eva stood half asleep in the sun. I slightly worried about turning her back on for the round but as soon as well went in the arena she went straight in to jumping mode with more oomph than I’ve had from her in a while! Like a switch she suddenly I had the feeling of “Ok lets do this”

Unfortunately we took a bit of a dislike to two toddlers and two dogs (who were almost under the fence watching Eva) with their mums standing on the grass outside of the seating area, as you will see from the video below both times we past that corner Evas concentration was no longer on the jumps which then resulted us knocking both jumps off of that same corner.

However the rest of the round was feeling great and I’m quite pleased with how she jumped round considering it has been quite a while.

One thing I find funny about the video of our round is the line between six and seven (six being the first jump we knocked). You can tell the confidence is gone and she is not very sure of herself therefore the line is a tad on the wiggly side!

The two down resulted in us being out of the placings but overall I’m happy with how she jumped and the energy that she had in the canter and in the arena. She clicked on when exactly when I needed and then went back to snoozing again afterwards just like a true pro!

June didn’t end quite as planned, Eva came in very lame and with a swollen hock (which happened to be on my birthday) I had the day off so I was up quickly and managed to get the vet out with a few hours as she really wasn’t keen to put weight on it! She certainly was feeling sorry for herself and she let vet pick up her leg an inspect with out any issues. The diagnosis was cellulitis from a small cut in the hock. She had a shot of antibiotics and I was given pain killers and anti inflammatory to feed her with box rest.

A few days later we had finished the medicine given by the vet and she was sound. I had an exam coming up during that week so it was pretty good timing! But the day of my exam she came in slightly lame again, the yard kept her in so I could decide if I wanted the vet out again for her. By the time I got there after my exam (which I passed!) the vets were closed and it was swollen again – no where near as big as last time – but enough for it to be clear that the first set of antibiotics hadn’t cleared the infection.

I called the vet out again but this time I was at work that day so the yard manager was at the vet appointment for me. He inspected it again and as suspected said its the same thing just not fully cleared up the first time. This time I was given a litre bottle of antibiotics and some sachets of painkillers to feed her. This time instead of box rest the full time as long as shes sound the vet was happy for her to go out but to keep feeding the antibiotics until completely finished.

She was sound a few days later so went back in to the routine of being in during the day and out at night. By the end next week the painkillers had finished and she’s still sound. Happy days. A few days later, at the start of July, the antibiotics have now finished.

Leaving us with a slight problem. The hock is still reasonably massive. It has gone down and it is more localised to the hock but definitely still has fluid in there.

After a call with the vet he advised I lunge her for the week and see were we are at. After only two lunges its already looking smaller! I’m now convinced that if Eva was a little less lazy in the field and moved around more then it would already be back in work!

I have a week left of lunging but all going well we will hopefully be back in work soon and I’ve got a few plans for Eva so I need her feeling better! 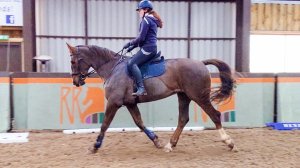