My ears are sore.

The flies have been attacking them and they have been causing me some discomfort. My human eventually realised this fact and decided to dig out a contraption that she forced on me at the first yard we were at.

It was bent out of shape and quite frankly smelt a bit funny. I with stood my head in the air snorting.

She was not going to get this on me!

But my human is a stubborn one. She did achieve this goal of hers, but in return I did manage to fling the fly mask across the stable twice during her efforts.

She wasn’t convinced by it though it had been so bent for so long that I wasn’t sitting right and she faffed with it for a good while to get it to sit properly. I knew what I had to do at this point to get it off.

I needed to convince her that it was getting in my eye. I must admit I played that part beautifully.

I managed to throw such a sulk on the way to the the field that my mother felt sorry for me and removed the contraption at the gate.

I thought. I had played my part, acting outstandingly in my lead role and won this game of hers!

Reader. I was fooled.

The very next day my dear human arrived with another fly mask!

My human was wittering on about something as we walked into the stable that day. I wasn’t paying much attention. It wasn’t until after our work out in which I protested throughout the walk to canter work, and we were getting ready for the field that I realised what she had been going on about.

She had it on me before I knew it! The human can act fast sometimes I must remember this. No matter how much I requested the removal she didn’t take it off. I even gave her a quick gentle nip on the back as she was sweeping outside my stable just to let her know that play time was over now and she can remove the mask.

But I had a firm no! The rudeness is beyond belief with this human. I decided to wait and she could remove it at the field.

As we were walking down I gave her a shove from behind in an attempt to make her realise that she has still not yet removed it! And yet what did she do! She LAUGHED and told me “It’s not coming off“.

How on earth after four years have I failed to train this human. It’s one steps forward and two step back!

I turned at the gate and stood and waited for it to be removed. This was no longer a joke!

SHE THEN WALKED OFF! 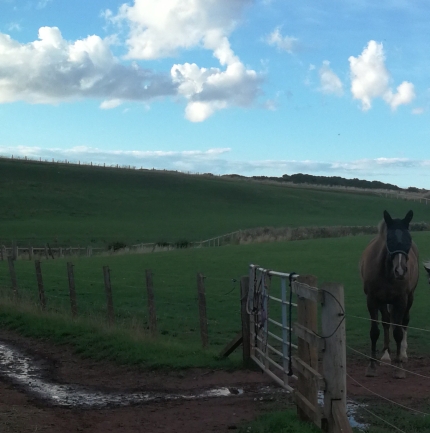 SHE LEFT ME WITH IT STILL ON!

She knew I was furious with her as normally I walk off an see my friends but instead I chose to stand and watch her walk away make her feel the guilt she deserves for leaving this on my face!

One thought on “Diary of a Moody Mare : Ears are on fire!”