May didn’t go quite to plan.
But that’s horses !
However I got to try out a lovely gilet from equestrian co and write a review on it, I sold my old car and bought a new one, saw some old friends that I haven’t seen in a while, jumped a record height for Eva and I, and had a flat work lesson where I got quite frustrated with my chaotic left hand.

While it was not what I had thought the month was going to be it did turn into quite a busy one!

Also back to the part where Eva and I managed to scramble ourselves over 1.25m!

Riding towards it I was telling her there are only three strides left but, as always, Eva likes to prove me wrong and she managed to pop in a forth and still clear it.

Eva and I will definitely not be jumping that height again in a hurry but I do think it is good to push the jumps up sometimes and take on a challenge. Obviously there is a difference between getting cocky and actually just pushing your boundaries. That jump was right slap bang in the middle for us. If I had asked for the jump up again that would of been stupidity at its finest but the height was still big enough for me to need to really ride to get over it.

I had a friend round who also brought one of her friends who runs her own photography business, Eva wasn’t feeling in a particularly helpful mood that day with lots of spooking and arsing about but we did get some very nice photos which I am very happy with. 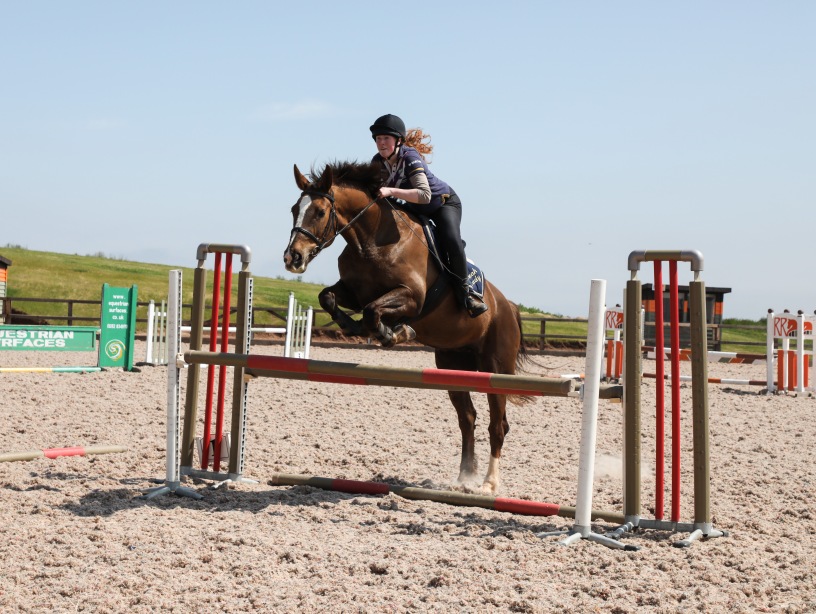 Our flatwork lesson was a week earlier and we were working on getting Eva to hold herself as I have fallen into the habit of carrying her. But as we were focusing on my hands being still this is when I realised that I appear to of developed a twitch in my left hand so that a lot of the lesson went as follows;

The end of the lesson resulted in me holding my whip horizontally under my thumbs which actually worked quite well and I’m going to start using that technique a lot to keep my hands under control.

The weekend after I went up north and saw some friends back in my home town. Unfortunately it was the same weekend as the showjumping cash show, which after a lot of umming and erring I decided to withdraw from. It was lucky I did my class (the 90cm) apparently had almost 40 horses in it ! I would of been there all night had I gotten to the jump off! Instead that morning before the show started I decided to go out on a hack. It was one of the most spooky uptight hacks we have ever been on. During which I seriously wondered why I thought going for a hack was a good idea.

Eva has been quite uptight recently and I think it is the grass getting to her head along with the fact that I have not been very consistent with her in the the whole of May, which she is probably not very happy with.  (I did speak to someone yesterday who is going to hop on and tell me what he thinks just incase there is something else going on.)

Safe to say a lot happened in May and none of which was in the original plan. To be honest June isn’t looking much different as so far the only solid things I have is a lesson on the 25th and a trip to the Royal Highland Show on the 24th to see a friend’s friend jump.

There is a Cat2 BSJ competition this weekend (3rd), it is very tempting but I feel like we have done a lot of jumping this month and I would rather aim for the one in July.

There is dressage on the 16th and 17th which has only just been announced. We haven’t done any dressage since March so I do think we need to refocus on our dressage. Plus once of my goals this year is to be hitting the 70 % mark and the only way we can do that is through practing and experience.

We will need to see what happens. I’m slowly seeing more and more people get themselves out to cross country courses for ODE or training and really need to get my self sorted with transport… I’ll get round to that one day. Right now Eva and I are now part time dressage divas and showjumpers and certainly not eventers, at least we can have 2 out of the 3 disciplines sorted by the time we get ourselves on a XC course!