Last Sunday Eva and I had a showing show! We have done it once before during which we both were thoroughly soaked, leaving Eva highly unimpressed at the whole showing faff.

By soaked. I mean we were soaked.

It was a good experience last time, but Eva didn’t take too well standing still while horses ran up and down in front of her. With that in mind I still wanted to enter us at the show at the yard as it is the type of competition that I grew up doing and something that I quite like doing. The horses I used to show were mostly Highlands or Clydesdales whose owners liked doing the in-hand classes and would like to see their horses do the ridden classes. 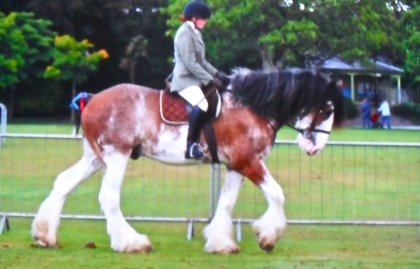 As there was a chartiy showing show on at the yard I thought it would be good to dig out my tweed hacking jacket – that I have had since I was 15 – and sign Eva and I up.

I went for the In-hand show hunter class and ridden event horse class. I was very tempted to let my boyfriend have a go at the in-hand class, however Eva can be quite boisterous a competitions therefore I wouldn’t want to leave him in a ring with her trying to get her to stand still.

The day before we had some lovely weather so it was a great day to give Eva a full bath and let her dry in the sun. I also plaited her mane so that they were ready to roll up the next morning. 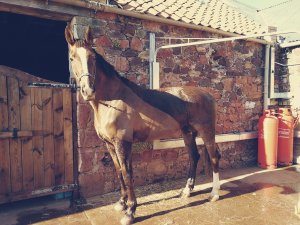 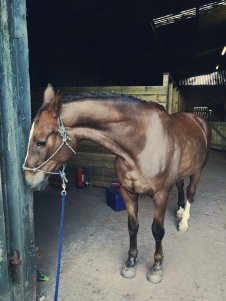 Sunday morning came and we were up at six. As I was getting everything together I realised the one thing I had forgotten to do the night before is to sew a button on to my hacking jacket, so my sewing skills were put to the test that day as not only was I frantically sewing on the button at ten past six I was also sewing Eva’s mane up that morning and she was not up for standing still!

We were at the yard for about 7am to finish off her plaits and enter the classes. First up was the inhand show hunter, I decided to enter this class as Eva is a fairly typical middle weight hunter. By “middle weight” I am referring to the type of hunter and the amount of bone the horse has. The light weights being able to carry riders up to about 12stone, and have about 8 and a half inches of bone under the knee, up to the heavy weights being able to carry over 14stone, and have about nine to nine and a half inches of bone.

During this class the judge looks at the general conformation of the horse, the horses movement and the horses behaviour. With the overall idea being to decide which one they would like to take out hunting. 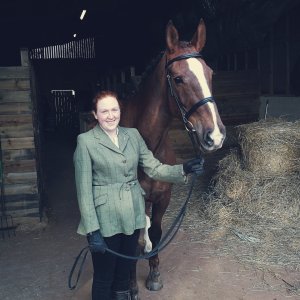 She behaved impeccably! She trotted beside me when asked, she stood still when in the line up and when we were in front of judge she did what she was told. I was very pleased with her so therefore I obviously felt robbed when we placed 5th out of 6. Im joking of course…

What perhaps let us down is the fact that Eva has capped hocks. Capped hocks is a swelling around the hocks which can be caused by such things as kicking walls or trailers, she had them before she came across from Ireland as I have the letter from when she vetted there. This has never effected her movement and she is perfectly sound with them – it is a cosmetic issue if anything – but in showing these can be seen as a conformation defect which would put us further down the line. Unfortunately the judge didn’t expand on her decision for any one so I only guess at her reasoning for the placing. 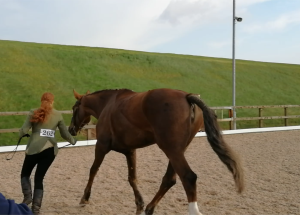 Next there was a bit of a wait until the ridden class so we watched a few of the other classes and chatted to a few people before my boyfriend went to grab us lunch.

After a wardrobe change and we were ready to go for the ridden.

For ridden event horse class we went into the arena individually and had to jump two show jumps and one rustic jump before doing a display, which was to include a free walk on a long rien and an extended canter. As there was jumping there was a jump set up in the warm up.

The problem was it was placed right in the middle of the warm up with no indication of which rein to jump it off or from which direction.

Hence it was a little insane.

We got cut off several times when approaching the jump. This got Eva very frustrated. So when the steward called for the first rider, I put my hand up to go in first as I thought Eva might explode if we didn’t go in soon.

As soon as I turned her on to the line for the first jump she was not having anyone stoping her! And she decided to pick her own height! 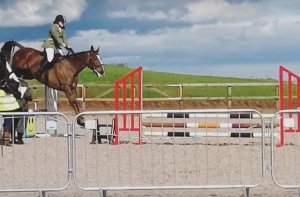 She cleared all jumps, so it was straight on to our display which was a little spooky. To be honest it felt all over the place. It was made all the worse, as at one point a bit of the foam from Eva’s mouth ( as you can see from the picture above she is very foamy) some how flew up and hit my lips. I rode the rest of the round with my mouth firmly shut, trying to think about what I was doing rather than the dribble from Eva that was seeping in to my mouth. As soon as I had saulted to the judge I was quick to wipe it off!

Looking at the video while it wasn’t our best performance there was some moments were we looked alright I thought.

However in saying that we did manage to get third place! The judges comments being, “Nice pop, but decided she will do what she wants a little“.

This comment made me laugh as it really was a perfect summary of how the round felt! 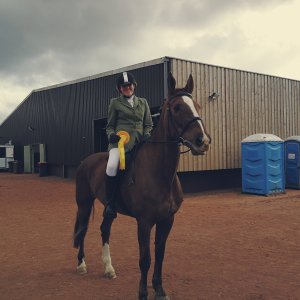 I am really pleased with how she behaved and overall it was a lovely day.

Of course now that we have placed in a ridden event horse class we should probably get ourselves out to a cross country course and actually get her to be an event horse!