At the start of this month Eva and I had a week filled with jumping, it started with two jumping lessons and finished with a jumping night. After all the jumping we did Eva is now getting a well deserved break from it over the next week or so, therefore we will be focused on flat work or hacking.

I originally wrote one very long post on the all three but instead Im going to split into three posts – focusing on each lesson and the jumping night. This post is on the jumping night, you can find the first post here and the second jumping lesson here.

As we had two jumping lessons during the week I thought it would be good for us to jump in the schooling night to finish off then to cool off on the jumping for a week or two.

I decided to sign us up for the 90cm. I couldn’t decide if I should do it twice or do the 1 meter as well, as it is a schooling night you can pretty much jump a round as much as you like. And jump the same height twice if you wanted.

The course was set out as below.

Ok so drawing out a course and making sure there is a straight line is quite difficult.

The first round was difficult. We have been jumping so well this week that I kind of went in and expected her just to reproduce what we had been working on without any help from me.

It went as expected.

While we only knocked the one and we had absolutely no energy coming up to it so it is slightly surprising that she only tapped the pole and didn’t go through it. The whole round lacked energy.

I decided to do the 90 again instead of doing the meter. We were too lethargic and if we did the same in the meter class then we would be going through them.

Our second round came and before the first jump I made sure to “wake her up” a bit. The round was better in several aspects but worse in others. The things that were worse were that we completely mucked up the striding in between 3 and 4 and while I did give her a tap in-between it was half hearted and she just bucked then knocked 4 which was a very easy jump to be mucking up.

On the other hand the mrs did manage to pop a flying change in in-between jumps 9 and 10. Which I am over the moon with. Ok yes its only a flying change. But;

A – We rarely do a flying change!

B – It is evidence that she is thinking for herself and trying to correct the canter lead if she realises she is on the wrong lead.

Overall during the night we were very inconsistent. Some jumps she gave room others we scraped over. Right now I think 90 is the height for us, I do hope to move up to a meter reasonably soon though. However considering BSJ (British Show Jumping) competitions were the round might be at 90, during jump off rounds the height can go up as much as 10cm. Therefore doing the 90 we have to be prepared to do the meter anyway.

Hopefully I can enter one of the BSJ competitions at the yard soon, I’ll be entering on a ticket which I will go into in another post. 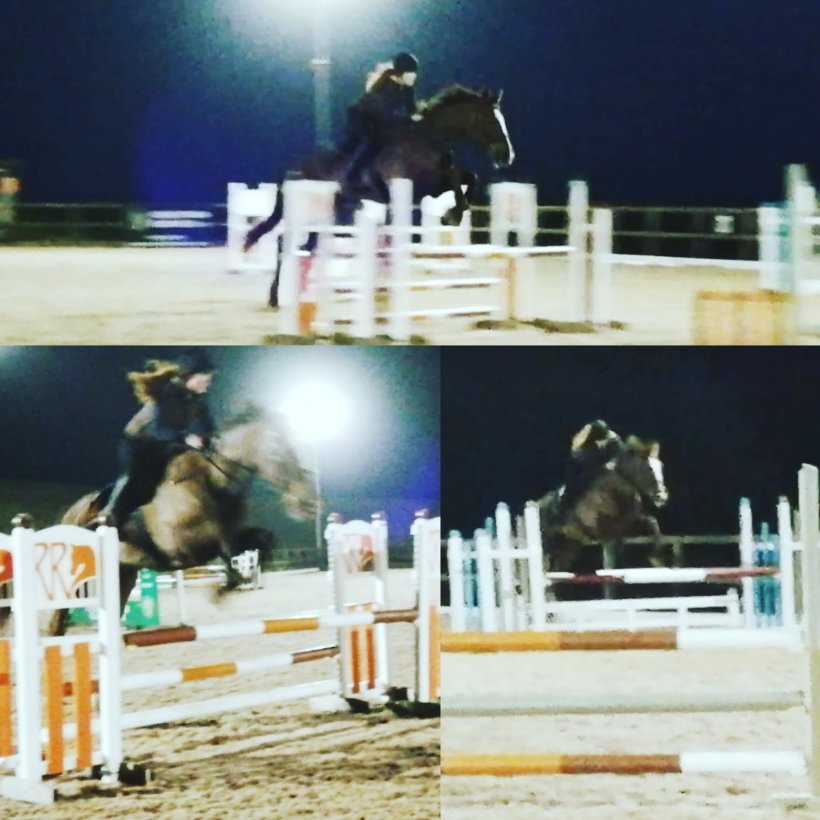 ᴍᴏɴᴅᴀʏ ᴍᴏᴛɪᴠᴀᴛɪᴏɴ - We 👏 need 👏 to 👏get 👏 back 👏 to👏 this!! - I've started planning what events I would like to try get Eva to this year and first up is some showjumping at home at the end of this month 👍 - #equestrian #equine #horse #horsesofinstagram #horseriding #horseoftheday #showjump #showjumping #chestnutmare #irishsportshorse #equestrianlife #mare #mondaymotivation #fitness #goals
I cant wait until the time of year when Eva can be out in her light weight again 😁 We are definitely speeding towards spring since it's not pitch black when I arrive at Eva after work anymore! 🙈 - I really need to get myself sorted and start thinking about what events I can see if Eva and I can go to this year. I've not got my own transport so I do rely a lot on the generosity of others giving us a lift 🙌 One day I'll have a trailer and be able to go out myself but I think that's a year or two away yet! Meanwhile there is unaffiliated showjumping at the yard I am definitely signing us up for! ✌️ - - Still from video taken by @keilidhewanwildlife - #equestrian #equine #horse #horsesofinstagram #horseriding #horseoftheday #chestnutmare #irishsportshorse #equestrianlife #mare #vsco #spring #planning
🐎🐎🐎 - Couldn't think of a caption for this so ✌️ - We are finally reaching the end of the week! Its always when you are looking forward to your Friday night or weekend plans that the week takes forever! 😩 Eva hasn't been, and isn't going to be, ridden much this week since Ive too much on. However when she is ridden our main focus is on the canter work. Ive decided to pop some draw reins on to help us maintain a more consistent contact while still asking her to move forward. 👍 - - - - #equestrian #equine #horse #horsesofinstagram #horseriding #horseoftheday #chestnutmare #irishsportshorse #equestrianlife #mare #vsco
Eva and I are finally getting back into the swing of things after the Xmas break. 👍 I'm thinking I need to start upping her feed slightly as it's feeling like there isn't much petrol in the engine. ⛽ Although in saying that I went for a small hack around the paddocks last week and she exploded in the canter so I know there is something in there!! 🙈 - - - - #equestrian #equine #horse #horsesofinstagram #horseriding #horseoftheday #chestnutmare #irishsportshorse #equestrianlife #mare #vsco #mondaymotivation #csshareit @countryandstable